Children in my family grew up with certain understandings: Dad gets the biggest piece of pie; don’t disturb Mom’s nap unless you need to go to the emergency room; Lawrence Welk is unavoidable.

We also obeyed a more universal decree: children do chores.

I admire parents who teach their children to work when it would be easier and faster to do the tasks themselves.

My siblings and I were reasonable about most parental requests, but we contested chores. We questioned their need, debated their equity, and dawdled about doing them.

As one of our assignments, Carolyn and I had to do the dinner dishes; one washed and rinsed while the other wiped and put away, alternating each night. She was a fastidious wiper, scrutinizing each item in the drainer and slamming it back into the dishwater if she found a smudge of gravy or spot of grease. I was a nervous wreck, pulling my hands from the water whenever she wound up for a throw and drenched by the tidal waves her force created.

When Barbara grew tall enough to reach the sink, Mom promoted Carolyn to cook’s helper, and my struggle changed. Every night with innocent eyes and infuriating calmness, Barbara insisted it was her turn to dry and wouldn’t back down no matter what I threatened. So we sometimes had to wrestle to resolve the dispute. Mom once entered the kitchen and found us locked in combat on the floor. She sighed and left.

One morning when Joel and I were visiting our grandchildren, a pitched battle over chores occurred. The task had changed; the fierceness of the exchange had not.

“No, Jack, you’re lying. I did it last time; you know I did. Mom, he’s lying; he’s a liar!” Jaynee pled her case with drama, indignation and tears: a teenager wronged. 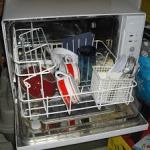 Jack fired back at top volume: “No, you didn’t, Jaynee; I did. I remember because you had to go to cheerleading practice. It’s true! I did it last. You’re the liar!” An easy-going 5th-grader with two older sisters, the boy knew how to counterpunch.

All this fuss because their mom told them she needed the dishwasher emptied—now.

My brother Bob, raising an abundant brood, once lamented that in an urban area, he had trouble devising meaningful work for his children.

“If I didn’t milk the cows, we had no milk. If I didn’t fill the coal bucket for the stove, Mom couldn’t cook. If I didn’t water the garden, our summer food supply died. What do I tell my children? If you don’t vacuum the living room, it won’t look nice? If you don’t mow the lawn, it will grow too long? They roll their eyes at me like I’m less than bright.”

He solved his problem by procuring paper routes for his progeny. The older children took on afternoon and morning routes, pumping bikes around their quiet suburb, carefully placing papers on peoples’ porches. When they moved on to other jobs, their younger siblings took over.

They still tell stories about their experiences.

But they learned to work, as are Jaynee and Jack, as did I—one of the most important gifts a parent can give.

Have any thoughts about chores and children?
Please comment below.

The following post is excerpted from a chapter in my book, A Seasoned Life Lived in Small Towns. The parts included contain the financial values that have guided my life.

My husband Joel and I came from large families with blue-collar budgets and parents who insisted we wear it out, save for a rainy day, turn out the lights. If everyone had learned such thrifty ways when young, I wouldn’t worry about our nation’s ability to weather fiscal storms; but many folks weren’t raised by graduates of the Great Depression, as Joel and I were.

When I was twelve, the sound of my parents’ voices pushed through the kitchen floor to the top bunk of the bedroom below, where I rolled over and stretched. I liked waking to their drifting conversations, but felt uneasy when their voices were loud enough that I could distinguish words, because that meant they were discussing money.

Though they agreed on the governing fiscal policy for our household—buy only what you can afford, stay out of debt, save as much as possible—they sometimes disagreed on its application.

In a good month when Dad had worked long, hot hours of overtime at the steel plant, Mom might suggest they spend the extra earnings on something frivolous, perhaps a vacuum that sucked more than it spewed. Dad would argue for making a double house payment. Usually the debate ended with Dad’s oft-repeated sentiment, “I’m just trying to keep a roof over our heads. We’ll be lucky if we don’t all end up in the poorhouse.”

I imagined the poorhouse as our neighbor’s ramshackle barn, full of people dressed in grain sacks with signs saying “the poor” hanging from their necks, huddling in empty stalls, and chewing on turnips. This image guaranteed my cooperation during the family meetings held when Dad was on strike or laid off. First, Mom would explain the situation; she’d then say that while Dad looked for work, we would need to cut back on spending. Her seven children, knowing the routine, would look solemn, but feel no anxiety.

She next announced the non-debatable reductions: despite recent promises, we would continue to be one of the few families in our rural area without a TV. We would stop the newspaper, quit going to the Dairy Queen, and do without drive-in movies. When told my piano lessons would be cancelled, I managed to hide my joy. After we heard the mandatory cuts, we were asked for other suggestions, but usually couldn’t think of any, though I remember one of us suggesting that perhaps we could save money if we bathed less often.

Aging well is a mix of attitudes and habits we begin developing as children; and financial fitness—having enough money for basic needs and small pleasures—is imperative. But families need not suffer in order to be fiscally sound.

I worry about those who use their credit cards to immediately fulfill every wish of their children and themselves, rather than saving and anticipating. I wish they could discover, as I did when young, that economizing doesn’t mean the absence of family fun and that paring a budget can be a beneficial lesson when children are allowed to participate.

Have some thoughts
about a family approach to financial fitness?
Please comment below.

Summary of Comments on “Battling the Holiday Bulge”
My thanks to those who responded. T.D. Davis mentioned the essential component of weight control my column didn’t address: exercise. Absolutely right. Mercy pointed out the difficulty of following good advice, which we all experience. And Kathleen blamed her junk food habits on her snack-loving great grandmother. We share the gene.