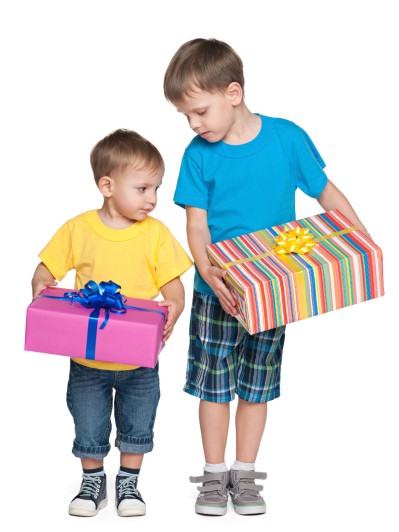 Home for Thanksgiving, I overheard a conversation coming from the kitchen where Mom was making cinnamon rolls while telling my youngest brother, JL, “I don’t think having two paper routes is a good idea in the kind of winter weather we have.”.

“But, Mom,” JL’s adolescent voice rose above the closing of the oven door, “If I take another route, I’ll be able to buy better Christmas presents for everyone.”

“JL, you’ve been buying and hiding presents for the past month. Enough is enough.”

I don’t know which amazed me more: JL’s willingness to ride his bike over the ice-slick roads of a Wyoming winter to buy special presents for his family or his self-assurance in selecting them.

I lack confidence in choosing appropriate gifts for my loved ones, and I’m not alone.

Several of my friends fret about what and how much to buy for grandchildren: “Don’t you think a full-sized St. Bernard stuffed animal is too much for a baby? My husband insisted we buy it, but I think my daughter will be horrified.”

“My grandchildren get way more than they need, and I think when they get so much, the impact of everything is lessened — sort of like the chocolate buffet on a cruise. But will giving them each one gift seem stingy compared to what they get from others?”

“Our teenage grandson wants money that he’ll probably spend on hair dye or another piercing. I love him dearly and believe you shouldn’t give gifts with strings attached, but do I want to encourage his offbeat appearance?”

Parents also fuss about the choices Santa Claus has to make. Following is a conversation some of my nieces and their friend had on Facebook a few years ago. In it, the young mothers shared their frustration with gift giving and suggested possible solutions.

Leanna: Luke just informed me that the toy he wanted so much for Christmas (the one I stood in line for an hour and a half to buy on Black Friday) is no longer on his wish list, and he’d like something completely different. An hour and a half of my life, wasted.

Shauna: I told my kids to make up their lists the week of Thanksgiving and said there’s no changing their minds after that. Santa is inflexible after Thanksgiving.

Carole: Christmas can be magical, but I am over trying to make it the perfect holiday. Give it to him anyway.

A Friend: Years ago I was sitting around with eight youngsters at spring break. I asked them what they got for Christmas. None of them could remember. I quit working so hard after that. Now I give each child a Santa gift, something to read, something to wear, and something to play with. It’s made life so much easier. Works in lean years as well as good.

Shortly after I read this exchange, I shared it with a friend who said that years ago she told her children they would each get three gifts from Santa because that’s what the Wise Men brought for the first Christmas. “And to my surprise,” she added, “they accepted my explanation without question — except the youngest who wanted to know if three was more than five.”

I like knowing I’m not alone with my gift-giving anxieties, but I still fuss. So if you see me in a store examining two different items and looking tense, please approach, point, and say, “That one.”

65 thoughts on “My Christmas Dilemma”