Once again, wildfires feed on the West. Uncontrollable firestorms, in a ravenous quest for combustible fuel, rage against the forests, range lands, homes and firefighters that stand in their way.

Those of us who call the west home scan horizons stacked with layers of brown-gray smoke, smell the acrid odor of burning landscapes, and count the number of days, weeks, and sometimes months that have crept by without significant rainfall.

We hear about homes destroyed and belongings lost; we imagine what it would be like to take refuge in a shelter, to no longer have a home, to lose possessions that brought us comfort and pleasure. We know life goes on, but the losses, large and small, linger. So we remember those who lost their homes to hungry flames.

With a deeper sense of irreplaceable loss, we also think of the firefighters who have died over the years as they battled the inferno that is wildfire. 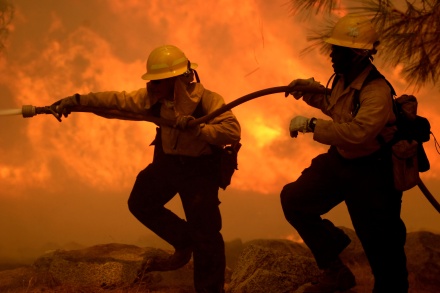 On June 30, 2013, we heard the heartbreaking news that nineteen members of the Prescott Granite Mountain Hotshots — husbands, fathers, sons, brothers, friends — lost their lives combating a blaze near Yarnell, Arizona.

On a day of high temperature and low humidity, gusting winds —fickle and fierce— pushed volatile flames back toward the nineteen firefighters. An explosive firestorm engulfed them, and they died. Their average age was twenty-six.

When I heard about their deaths, I felt again the shock and sorrow that gripped communities on the western slope of Colorado on July 3, 1994, when a fire on Storm King Mountain took the lives of fourteen young men and women. The firefighters died as they deployed fire-resistant shields in a desperate attempt to stay alive while oblivious holiday travelers streamed by on I-70 a short distance below.

I was married for many years to a man who fought range and forest fires for a BLM crew out of Carson City, Nevada. I know Bill’s work was long, hot, dirty, strenuous, and dangerous. I once asked him if he was afraid as he advanced toward a wind-whipped fire while dry trees exploded in flames. “Sometimes,” he replied, “but you don’t really have time to dwell on fear; you’re too busy trying to beat the fire.”

Somewhere, sometime, I read an exchange that I’ve never forgotten—though I can’t credit it because all other details of the piece, including the author’s name, have faded. As I remember the dialogue, one man mentioned another’s brave past and asked if he had ever known fear. The answer came quickly and humbly: “Of course I’ve known fear. If you’re not afraid, how can you be brave?”

I believe the nineteen firefighters we lost in a wildfire in Arizona and the fourteen who died on Storm King Mountain walked into danger, conquered fear, and exemplified bravery.

So I pray the rains will come, the heat will break, and those who fight wildfires will return safely to loved ones as another hot season ends.