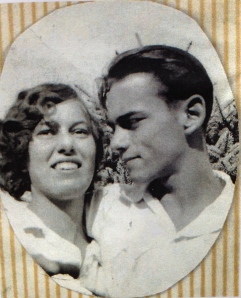 When I look in the mirror, I see Dad’s eyes looking back. I have his height, build, ears, and gestures. I like my physical resemblance to him, but I’m surprised when I display his behaviors, especially those I vowed to avoid when I was young, smug, and critical.

My dad’s unrestrained emotions, colorful language, and lack of guile wreaked havoc with my youthful notions of appropriate behavior. I remember refusing to go into the local bakery with him because he insisted on asking for stale bread, rather than day-old, as I thought proper.

Then the day arrived when my granddaughter told me she wished I would say soft drink rather than soda.  The only thing worse than asking her friends if they wanted a soda, she added, would be asking if they wanted pop.

Dad also embarrassed me by bursting into song at odd moments. I liked his melodious voice, but no one should sing “Blood on the Saddle,” while shopping at the supermarket or waiting in line at the bank. He’d croon obliviously, and I’d pretend not to know him.

Then years later, I received a note from one of my 4th grade students when I was home with the flu: “I hope you get well soon. I miss the way you go around singing and humming all the time.”

I used to judge Dad harshly when he flared into frustrated anger at things that didn’t work: cars, cows, the IRS. But to this day, when thwarted, I mutter profanities and thump the offending objects: sewing machines, vacuums, my hair.

However, even when young, I recognized that my father possessed the attributes that mattered: He loved and respected my mother and made her and his children the focus of his life. He never spoke a harsh, hurtful, or judgmental word about Mom, us, or anybody else. We always knew where he was and when he would be home, and he never disappointed us. Until the day he died, his children knew that if we needed his help, he’d be there, no matter how old we were or where we were.

He never said, “I love you,” to me, but he didn’t need to. I saw love in his eyes, sensed it in his actions, and carried its certainty with me every day I lived and every place I went.

At a recent class reunion, a former friend and neighbor, David, told me how much he had enjoyed knowing my dad. He remembered a time when he’d worked with Dad for several days putting up hay for an injured neighbor.

“I was lucky to be paired with him. He worked harder than anyone else, even those much younger, and sang or told stories the entire time. He treated me like I was worthwhile. I liked and respected him.”

So did I, David. And I loved him with all my heart.

Hug your fathers on Sunday.

22 thoughts on “Remembering My Father”